“ You do the darndest things! You’re half saint and half devil! There isn’t any middle ground – you go to both extremes!”

That’s Della Street, confronting her boss, Perry Mason, at the end of his sixth adventure, 1935’s The Case of the Counterfeit Eye, for playing as much the morally ambiguous action hero as everybody’s favorite criminal attorney. His response?

I spoke at length in January about my love for the TV show that was based on the over eighty Perry Mason novels and stories written by Erle Stanley Gardner. Yet I’ve never talked about the books on this blog for the simple reason that I have forgotten all about them. During my 20’s, I discovered that my best friend’s mom shared my affection for the character. Fortunee was a lovely Tunisian lady with a thick French accent, and she cooked a mean cous cous. While feasting away one night, I observed multiple Perry Mason adventures decorating the end tables, and we talked about the show throughout dinner. It inspired me to explore the books myself. I must’ve enjoyed them, for I read a bunch. But the memory of what I read escapes me! Ah, fair youth! 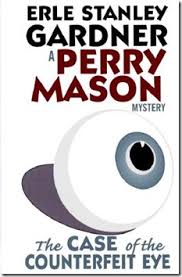 So let’s consider The Case of the Counterfeit Eye as a brand new start. I can’t tell you how this personification of Mason may differ from the later books – Mason’s literary career spanned 38 years – but I find the differences between this Mason and the TV version of the character fascinating. Although there is definitely a noir feeling to the first season or two of show, its source is primarily visual, with the L.A. landscape, the gritty motel rooms, and the suburban cesspools of corruption harshly lit in stark black and white. But the man himself, as portrayed by Raymond Burr, remains a gentleman throughout. Any strong-arm qualities he demonstrates are reserved for the occasionally recalcitrant client needing a dressing down and for the inevitable showdown on the stand with the true killer. Burr’s Mason is more of a classic armchair detective, doing his own legwork only when necessary and leaving most of the heavy lifting to private investigator Paul Drake. It was Burr’s expressive face that made Mason one of TV’s most indelible characters, his dark, soulful eyes searching within for enlightenment, followed by that half-smile which told us that this would not be a good day for the District Attorney!

The Mason we find in Eye is a different bird altogether, urbane when he needs to be, yet tough as nails in a pinch. He would fit nicely in a Dashiell Hammett novel, sharing office space with Sam Spade. He’s smart as a whip, but he’s also a schemer and a tough guy, manipulating the law with one hand and brazenly standing up to intimidation, both verbal and physical, with the other. He’s going to need all his skill set here, for Eye is a roller-coaster ride of crazy.

Thank God Mason has his two stalwart musketeers to aid him: private investigator and friend Paul Drake and Della Street, the greatest legal secretary in fiction. Della is 1935’s answer to a Google search engine combined with the sassiness of Siri and the soul of a poet. When a potential new client walks into Mason’s office on Page One and Mason asks his secretary the simple question, “What does he look like?” Della’s response is part Sigmund Freud, part Sherlock Holmes:

“He is about forty, with lots of black, curly hair. He has an air of distinction about him and he looks as though he had suffered. He is the type of man you would pick for a poet. There is something peculiar in his expression, a soulful, sensitive something. You will like him, but he is the type that would make business for you, if you ask me – a romantic dreamer who would commit an emotional murder if he felt circumstances required him to do it.” 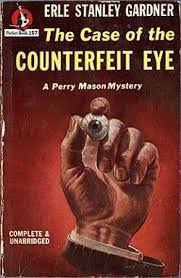 This man is the first of not one, but three clients for Mason. Certainly Peter Brunold brings with him one of the most unique requests in the annals of mystery fiction: one of his glass eyes has been stolen, and he worries, just like you or I might worry, that it will find itself lodged in the hand of a victim at a murder scene. This eye has been expertly made, a cut above your typical fake eye; plus, it’s a “morning after” eye, the kind of bloodshot appendage one pops into one’s socket after an especially heavy night on the town, so it is much more likely to attract attention.

The second client is a real pip: Harry McClane resembles one of my more snotty high school sophomores, and he arrives with his older sister Bertha, who forces him to spill to Mason that he has embezzled $3,000 from his boss, a wealthy loan shark named Hartley Basset (nobody does names like Gardner!). Bertha wants Mason to intercede on her behalf and arrange for her to pay off Harry’s illegal debt before Basset has her brother thrown into prison. Harry could care less about the trouble into which he has gotten himself; he figures he has an ace up his sleeve in the form of a mysterious accomplice whom he refuses to name.

When Mason arrives at Basset’s home, he makes the acquaintance of his third client, the luscious Sylvia Basset, Harley’s wife. She seeks help to escape her terrible marriage so that she can run off with another man without committing bigamy. Basset’s cruelty has also affected Sylvia’s son Dick, who is married to the mysterious Hazel Fenwick, who gets attacked by a mysterious intruder that night, leading Mason to discover the murdered body of Harley Basset, surrounded by no less than three guns. And clutched in Basset’s hand is . . . you guessed it! The missing glass eye!

Discovering how these three separate clients are interrelated is part of the fun of this complicated tale. Even more fun is observing the various shady ways Mason operates, often with Della and Paul’s assistance. At one point, Mason and Paul disguise themselves as window washers so that the lawyer can interview a missing witness from outside the sixth floor window of her hotel room. People drop out of sight constantly in this drama, leading Mason on a chase that almost gets him locked up for murder and causes Della to turn up at the office in a mink coat and little else.

Counterfeit Eye also marks the first appearance of Mason’s nemesis, District Attorney Hamilton Burger. Here Burger is described as elegant and composed, a far cry from the exasperated loser portrayed by William Tallman in the series. (Of course, battling Mason over the next eighty cases may have an enervating effect on Burger’s self-esteem.) In Eye, we get to watch in detail as Mason gets in and out of one legal scrape after another. For make no mistake: this lawyer plays fast and loose with the law in his efforts to free his client even before that client is arrested for murder. And it’s interesting to see that Mason has a long-range plan for how he’s going to relate to D.A. Burger. Although each book, like the series, was a standalone case, Gardner clearly had an arc in mind here.

We get the added bonus of a second murder (with a second eyeball clutched in a dead man’s hand), allowing the D.A. to turn up the heat on our hero. That second murder provides an object lesson in Mason’s abilities, as he manipulates both the D.A. and the police in order to get himself out of a jam. All of this is told in the rat-a-tat style of the best noir mysteries, reminding one that Gardner spent twenty years before he started penning the Mason series writing stories for pulp magazines like Black Mask and Breezy Stories, tales like “Nellie’s Naughty Nightie,” and “The Shrieking Skeleton.”

For most of Eye, Gardner keeps the pace up brilliantly, until we land in court three quarters of the way through. Then, as Mason and Burger square off, the pace begins to sputter a bit. Mason clearly knows his way around an objection, but it’s almost as if we’ve landed in Ngaio Marsh territory as the D.A. parades one expert witness after another in order to establish the corpus delecti and the motive. We learn more about fake eyeballs than you probably ever thought you’d know, and the information certainly helps Mason solve the case. But only one of the suspects appears on the stand, and this is where I missed the heightened drama of the TV series, as guest stars paraded into court, accused by Mason in one fakeout after another until the climactic interview:

(This isn’t a spoiler. The dialogue doesn’t occur. I just wanted it to.)

And while the whole “eye” aspect of the story is generally a plus, it is accompanied by such a walloping coincidence here that I emitted a small raspberry! The other problem with the novel is that if you are acquainted with the TV series, you shouldn’t have any trouble picking out the killer – even though this novel was never dramatized. I would guess that 75% of the killers on the show fall under a certain category of character, something I will not describe here in order not to spoil things. It’s the same issue with half the “B” movie mysteries of the 1930’s and 40’s – I call it “the Ralph Morgan Factor.” If anyone knows what I’m talking about, I’ll be happy to discuss it with you privately.

At any rate, as the characters were introduced, I made an immediate guess based on my high success rate with the TV show, and as events progressed, my hunch was proven correct.

My blogging friends know this about me: Brad doesn’t like to get the answer right! But honestly, the whodunit aspect of the book is almost secondary to the delicious schemes Perry Mason pulls, one after the other, in order to stay on top of things. For the joyride this provides, I strongly recommend that you keep an eye out for this title.

5 thoughts on “EYEBALL THIS, PAL! The Case of the Counterfeit Eye”