I’m so excited to tell you that the Tuesday Night Bloggers are back! After a month-long hiatus, during which, frankly, most of us were plowing through 1937 mysteries for Rich’s Crime of the Year feature at Past Offences (I clocked in three!), the TNG is returning next week with a new topic, accompanied by a brilliant new cover by Bev Hankins! Just in case you want to join us, we’re covering a wide-open field this time: in honor of April, we welcome any topic that begins with the letter A. Thus, you could post about your favorite crime caper featuring adultery or arson, or characters named Arthur or Agnes, or authors named Allingham or Aird . . . it’s all up to you!

Still confused? Let me give you some more concrete examples from my life:

A is for Announcement

Today on the blog, my 100th follower joined the fold! Inch by inch, I’m catching up to Trump and Justin Bieber. Seriously, though, I never imagined they’d be beating down my door to talk about old mysteries and Alfred Hitchcock movies, (ooh, another A), and I feel honored to have attracted such an erudite and appreciative assortment of thinkers. I admit to being a man who has always loved having an audience. In this blogging business, every new comment excites me. So thanks for making this new chapter of my life so much fun.

A is for Anniversary

In my non-virtual life, I teach high school Drama and Film Studies. I’ve been doing this for twenty-eight years, twenty-five of them at San Mateo High School. During that time, I’ve produced and/or directed three shows a year – usually two musicals and a play – and I’ve been privileged to work with some mighty talented and dedicated students. Putting on a show bonds a group of people together for life! I am still close to many of the 96 student actors who were in my own senior musical, The Boyfriend, at Lowell High School. Being a director puts you in a different position in the community. You get to order everyone about, and you have to leave the cast party early (mainly because I’m just . . . so . . . tired!) 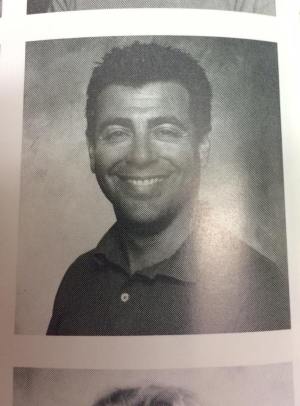 Me in year #1 teaching at SMHS

On Saturday night, the SMHS Drama Boosters hosted a celebration of my 25 years at San Mateo High. The deal was that I was allowed to know that there would be an “event” at the theatre on March 25, but I was not let in on any of the details. This was a great relief to me on all fronts. I was relieved that they were doing something, and I was relieved that I didn’t have to do anything except show up! All I asked was that we not have a sit down dinner so that we wouldn’t be trapped at tables like you are at a wedding or bar mitzvah!

Also, I requested that the invitation go out as far back in time as possible. Thanks to the intensity of the experiences we shared, (as well as the existence of Facebook,) I have maintained relationships with former students who are now as far flung as New Zealand (Chip directs and still acts, and one of his kids just appeared on a national singing competition), Seattle (Natasha is a TV news reporter), L.A. (Taylor is a staff writer for a television show called Shadowhunters), and New York, where they act, sing, dance, do improv, write, play music, direct, teach, rep as agents, and tech shows. And that’s just the theatre kids! As one of my earliest favorite kids, Andrea, said on Saturday night – and it’s something I’ve been telling students and parents for years – the skills you learn in Drama class apply to every possible aspect of life and work. I have taught future lawyers, doctors, dentists, business women, teachers, start up owners, hair stylists, fashion designers, animators, coders . . . you name it, somebody is doing it!

By the time Saturday night rolled around, the relief of having no control over what was to happen had given way to total anxiety over having no control about what was to happen. I was “chauffeured” to the event by my buddy Keely, who appeared in her SUV in full chauffeur drag. She had a bottle of wine chilling in the back seat and simply said, “Pour a glass, you’re going to need it.”

She was right about that.

What can I say about my anniversary party? Control freak that I am, all I could do – and I did it willingly – was give myself over to the emotion of the evening. One after another, students from every “era” of my career appeared onstage and serenaded me or said something. I got roasted a bit, and it occurred to me only later that these kids know me so well that they knew how far to go, what to say, to deliver even a touch of sarcasm with love. They recaptured moments from many of my favorite shows, sometimes altering the lyrics to fit the occasion. My relationships with each one of them are as varied as they are, and their presentations reflected that. Oh my gosh, the talent! And the smarts! And the heart! What teacher doesn’t long for a chance to see the amazing adults they’re kids have become! It overwhelmed me – a fact that my colleagues in attendance continue to tease me about. Even my mom says she turned to my aunt and said, “I think Brad is speechless!” It’s a rare moment indeed when I’m at a loss for words. Fortunately, the evening was filmed so my verklempt-ery is on record! 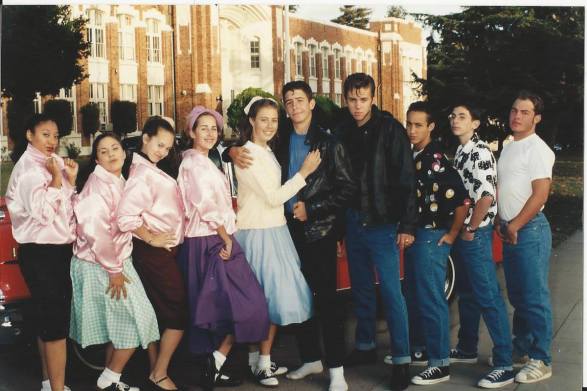 A is for Animation

One of my students, Nick, was in nearly every show in his four years of attendance. Only at the end of his senior year did I realize that in each show, unconsciously, I had cast Nick in all the roles I wanted to play! After high school he turned to his other love – drawing – and is now a professional illustrator. For the anniversary, he created two “cartoons” featuring a version of me that I wanted to share. He even took the time to draw the ring of keys I used to carry at my hip (before I started to worry about my hips!) I now dream of an animated series about a sarcastic drama teacher that Nick would draw and I would write. We are currently in discussions . . .

To those of you who may have the good fortune to be so honored, I want to offer a bit of advice about I learned from this event. First, if you know it’s going to happen to you (and I did because a very good friend who planned much of the evening knew how much I hate surprises), just forget about it until it happens. Then, as it’s happening, simply let it wash over you. Hopefully, you will be as lucky as I have been to include among my former students a gifted filmmaker who got the whole thing on video (Thanks, Alyssa!) and a former Booster parent who is a professional photographer (thanks, Henry!) The souvenir book and CD are in process as we speak! But even if that doesn’t happen, don’t try to take every single thing in. Focus on the moment because there are a million of them to savor. And finally, be prepared to feel totally hung over the next morning (and I swear I had one small glass of wine ONLY) and to find it impossible to put into words how you’re feeling. As it is, I feel I will be saying “thank you” to people for the rest of my teaching career at least! And that is as it should be because I came back to work on Monday and this kid hadn’t done his homework and that kid refused to spit out her gum and some group was in-fighting too much to get anything done . . . and I could feel this biiiig grin on my face even as I tried to sort out the day to day muck of education.

So that’s my list of “A” words to offer you as inspiration for your welcome participation in the Tuesday Night Bloggers beginning on April 4. Oh wait, there’s one more!

A is for Analysis

All winter long, my good buddy JJ over at The Invisible Event and I have been anticipating our Big Christie/Carr Throwdown by re-reading the titles that our friends in the blogosphere voted on as representing the best of each author. So if you want to take part, be sure and read/re-read Agatha Christie’s Death on the Nile and John Dickson Carr’s He Who Whispers while JJ and I try to figure out how the heck we’re gonna do this thing! Just know that the spoilers will fly as we overanalyze to our hearts content just what makes these two authorial giants tick! And by the end, we should have it all figured out for you just what makes Christie the greatest mystery writer who ever lived and Carr the darn best second placer there is!