“This is the Inner Sanctum – a strange, fantastic world controlled by a mass of living, pulsating flesh – the mind. It destroys, distorts, creates monsters . . . commits murder. Yes, even you, without knowing, can commit murder!”

Every month over at Past Offenses, Rich Westwood picks a different year to celebrate for the mystery stories that appeared on the page and screen. The year for February is 1943, and I swear I am working on a couple of novels here, if only work wouldn’t intrude!

Meanwhile, the movies beckon, and for cinema, ’43 was indeed a very good year. It seems like all the stars were making a great film, and since the 40’s were still the height of the Hollywood studio factories, most of them made two or more movies! Fresh off of the 1942 classic Casablanca, which topped the Academy Awards in ’43, Bogie made three pictures, Ingrid Bergman paired with Gary Cooper in For Whom the Bell Tolls, and Claude Rains, who had stolen Casablanca out from under Bogart and Bergman’s noses, played the most human, and certainly one of the best, Phantom(s) of the Opera. Bette Davis made two of her best: the romantic Watch on the Rhine and the bitchfest Old Acquaintance. Cary Grant produced one of his finest performances in Mr. Lucky and still had time for Destination Tokyo. Mickey Rooney and Judy Garland created one of their most endearing pairings with Girl Crazy. And Donald Duck won an Oscar for his performance in that choice piece of Disney propaganda, Der Fuhrer’s Face!

But I want to talk about Lon Chaney, Jr.. In 1943, he had made one of the most entertaining of the sequels to the Universal horror cycle, Frankenstein Meets the Wolfman. The truly remarkable thing about Chaney at this point was that he had played both the Frankenstein monster (in 1942’s the Ghost of Frankenstein) and, most notably, Lawrence Talbot, the tortured soul who had received that pesky lupine bite in 1941’s The Wolfman. Since his respective characters had died at the end of both of these films, it seems clear that Universal appreciated the talents of this young man, the son of one of the greatest horror actors of the silent era.

And Lon Chaney, Jr. liked the work. Perhaps he felt less tagged as a “movie monster” because he consistently kept his hand in character work. He had distinguished himself as Lenny in the critically acclaimed 1939 version of Of Mice and Men and would work on other notable projects like High Noon. Universal Studios, however, had him pegged as a ghoul. In the same year as Frankenstein Meets the Wolfman, the studio cast Chaney in the title role in Son of Dracula, making him the only actor of all time to play all four leading Universal monsters (the fourth being The Mummy in three sequels!)

Maybe the studio wanted to keep their star happy, or maybe it was because Chaney had begun to star in episodes of an extremely popular radio program called Inner Sanctum. For those of you who don’t know much about old time radio, Inner Sanctum would be a cross between The Twilight Zone and Suspense. The stories were usually twisted tales of crime inspired by a series of novels published under the “Inner Sanctum” imprint. They tended to focus on a character who had either committed a murder or thought that they had committed a murder. They tales were creepy but definitely employed a dose of macabre humor. At any rate, Universal thought that the idea would be great for a series of films, and they signed on Chaney to star in six of them. Each film began the same way, with an introduction (see above) delivered by a disembodied head in a crystal ball. In each film Chaney would play a different character, yet there was a distinctly similar tone to all of them, minus the humor of the radio series. Despite this, and the low-budget look and feel to them, it all amounts to a half-dozen tidy thrillers with much to enjoy.

And, lucky for Past Offenses and me, it all debuted in 1943 with Calling Dr. Death. Here, Chaney plays Dr. Mark Steele, a successful neurologist who has embraced hypnotism as his method for curing his neurotic patients of what ails ‘em. If only he were more successful in his personal life, but his wife Maria cheats on him constantly until he finally begs for a divorce. There’s a lovely nurse in his office named Stella (played by the Broadway actress Patricia Morison), see, and life’s too short to deal with an unfaithful spouse. Maria, however, is perfectly happy being a rich doctor’s wife and seeing whom she pleases. She refuses Mark’s request and then does what all unfaithful people do in movies: she laughs in her husband’s face.

So when Dr. Mark has a dream that night where he strangles his wife to death, we’re not surprised. (And Strangers in a Train is still eight years away from being made!) And when Maria goes away for the weekend, ostensibly to meet her lover, and ends up dead and disfigured, Dr. Mark would love to protest his innocence. Only he can’t because he has conveniently suffered a mental blackout and can’t remember a thing . . .

Yes, the premise is all a bit hokey, but Chaney performs the hell out of it. The actor had reached out to the producers and requested that the films resemble the radio shows with their frequent use of “stream of consciousness” dialogue that probed the main character’s mind. This made the stories tighter (and the movies shorter – Calling Dr. Death clocks in at 63 minutes) and adds to the sense of melodrama.

The other good thing about this film is that it is very much a whodunit and works up to a fine ending. Did Dr. Mark actually kill his wife and then block it out? If not, who is responsible for Maria’s murder? The answer is deliciously satisfying.

The following five Inner Sanctum films were made quickly over the next two years. The second, and possibly the best of them, was 1944’s Weird Woman, starring Chaney as a professor who marries a woman from the South Seas (inexplicably played by the very un-exotic Anne Gwynne. Why do all of his friends despise her? Is she using magic to further her husband’s career? This is the first of many adaptations of Fritz Lieber’s wonderful novel Conjure Wife, published that same year. (A more prestigious version was made in 1962 as Burn, Witch, Burn or Night of the Eagle.) The plot is a fine mixture of mystery and the supernatural.

The real female star of Weird Woman is Evelyn Ankers, one of the great B-movie “Scream Queens.” She had a wonderful chemistry with Chaney and appeared in many of his horror films, although it is rumored that they hated each other in real life. Ankers could play good or evil with ease, and I’ll leave it to you to discover which she plays here.

Things started to get a bit more hokey and formulaic with Dead Man’s Eyes (1944) in which Chaney plays an artist who gets blinded, receives new eyes, but is suspected of hurrying his donor’s death along. This film is notable as the only Inner Sanctum appearance of Acquanetta, a truly mediocre actress who claimed to be part of the Arapaho tribe, or possibly African-American, but who just might have been born Mildred Davenport, from Norristown, PA). Acquanetta could strip a line of all feeling with one hand tied behind her back. 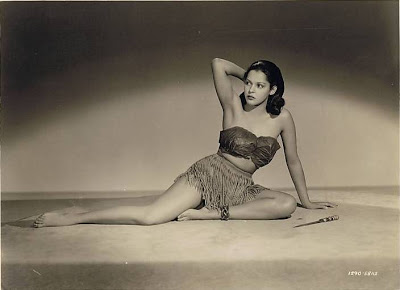 Ankers returned in the fourth outing (and the first of three films made in 1945). The Frozen Ghost is an odd title for the story of a magician (Chaney) who accidentally kills an audience volunteer on stage and, wracked with guilt, gives up his profession, jilts his fiancée (Ankers) and goes to work in a strange wax museum. (Yeah, that’s what I would do!) And that’s when things start to get complicated . . .

I have to confess that I remember nothing of the fifth entry, Strange Confession. (I own the series and will re-watch at some point.) But the final film, Pillow of Death, is quite good! Here, Chaney plays a completely different character in that he is a lawyer accused of murdering his wife. (Hey, in all the others, he plays a doctor!) Against the background of a series of murders, Chaney and his girlfriend (Brenda Joyce) try to prove his innocence. It all ends most satisfactorily!

Well, I ended up giving you six bangs for your buck, but I still submit this to Past Offenses because it all started in 1943. Yes, ’43 as a very good year . . .

6 thoughts on “CALLING DR. DEATH: The Wonderful World of The Inner Sanctum”